This application restricts groundwater use for any new commercial development in Tusayan.

This application restricts by 1/3 any new commercial development of what's currently allowed by Tusayan zoning.

Thousands of area residents live in employer-owned housing, which has harmed the community fabric. Stilo donated 40 acres to the Town for affordable housing uses.

The Town of Tusayan, located seven miles from the South Rim of the Grand Canyon, and Stilo Development Group USA have filed a road easement proposal with the Kaibab National Forest to provide a road and utilities to two publicly and privately-owned properties in Tusayan, Kotzin Ranch and Ten-X Ranch. 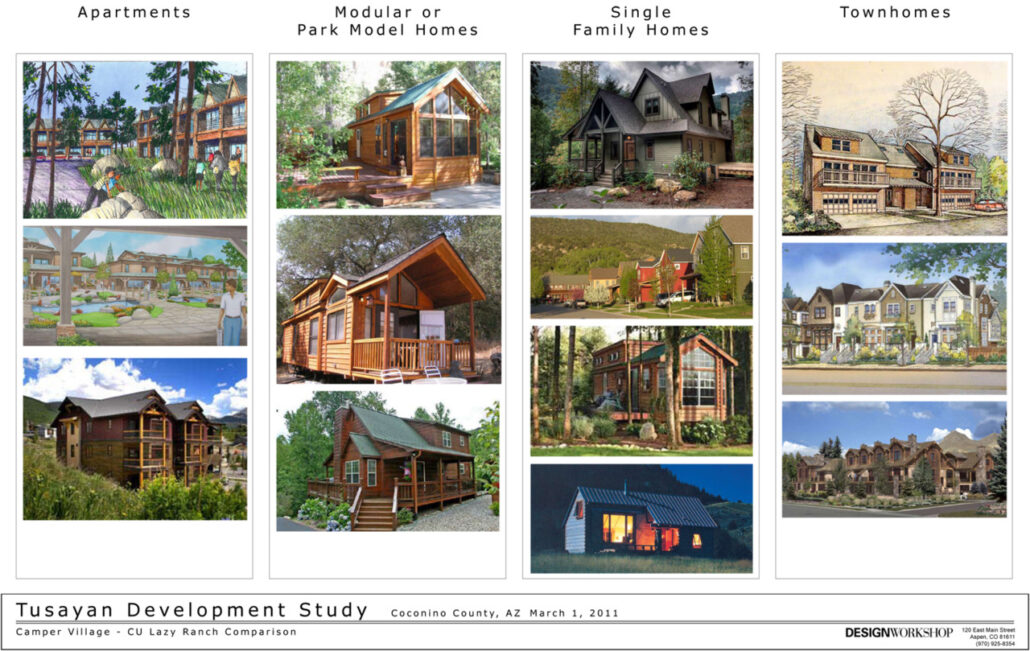 e proposal represents a collaborative effort to address several important regional needs, including badly needed regional housing and amenities, competitively priced services for visitors and area residents, open space management and cultural and social development that allows for the preservation and promotion of traditional local values. It includes significant groundwater and density restrictions for any new development on the locally-zoned properties.

In 2016, the Kaibab National Forest returned an initial application after a scoping period identified comments from stakeholders regarding groundwater use and potential commercial densities. The new planaddresses these issues by committing to using no groundwater for any commercial development and limits any new development density to one-third less than is currently allowed by local zoning.

“For nearly 30 years, multiple organizations and federal agencies have identified significant quality-of-life and housing needs for area residents, challenges within the park including housing and traffic, as well as visitor service shortcomings, and yet the problems have only gotten worse as park visitation continues to increase,” Tusayan Mayor Craig Sanderson said. “This proposal represents an opportunity for stakeholders to work together and get it right.”

When the proposal is accepted by the Kaibab National Forest, a National Environmental Policy Act (NEPA) process would analyze potential impacts of the road easements and allow multiple opportunities for public comment.

Permitted uses and density: In addition to addressing previous scoping comments by reducing density and limiting ground water use, the town’s zoning code ensures permitted uses on the properties are complementary to commercial development that already exists in Tusayan. Public statements made in opposition prior to and during the previous application’s scoping referring to “big-box” shopping mall development, roller coasters, golf courses, water parks, and other non-permitted uses were incorrect. Furthermore, many statements by opponents during the previous NEPA scoping inflated the total development density by including other properties in Tusayan not part of this application. This application, same as the last, only contemplates the Kotzin and Ten-X properties, with a newly added density reduction of one-third.

as a grocery store, laundromat, child care, health care, visitor services and others. Most Tusayan and Grand Canyon National Park residents live in housing controlled by their employer. If you lose or change your job or retire, you lose your home. This application allows for more employment stability and enables people to own or rent the home of their choice. It also allows an opportunity for private investment to play a role in easing the Park’s resource burden with regard to housing, traffic, education, health care, Internet, water and other important issues the region faces.

The Tusayan Town Council approved zoning on the Kotzin and Ten-X parcels in 2011, and a general plan in 2014 that illustrates a vision for new development on those two properties and others to address regional needs. The town works closely with area stakeholders including the National Park Service, U.S. Forest Service, Arizona Department of Transportation, Coconino County, Federal Aviation Administration, Arizona Public Service and other non-government organizations on many important regional issues.

About Stilo: For nearly 30 years, Stilo Development Group USA has owned 11 inholdings in the Kaibab National Forest and has been a positive partner of the Grand Canyon region for over 20 years.

Some of Stilo’s contributions to the region include: